Guitarist and composer Kevin McCormick has studied and performed in Europe, Asia, and the United States. He holds a Diploma in Guitar Performance from the Indiana University School of Music where he studied classical guitar under the tutelage of Ernesto Bitetti, composition with Don Freund, and jazz with David Baker. He earned a degree in English from the University of Notre Dame with a concentration in poetry. Additional guitar studies were with Sergio Notaro at Centro Romano della Chitarra in Rome, Italy. His compositions range from solo and chamber guitar pieces to experimental rock and jazz works to a complete mass. From 1991 to 1995 he lived in Nagoya, Japan composing, performing, and studying the Japanese koto. Since 1994 he has taught guitar privately and at schools and universities. In 1999 he opened Mirabilis Studio for Guitar in Kerrville, Texas where he resides. He is currently Instructor of Guitar at Schreiner University and music director at Notre Dame Catholic Church in Kerrville.  In 2010 the Symphony of the Hills to commissioned him to write “Soleares,” a piece for guitar and orchestra, which he premiered with the orchestra.  His Magnificat (for guitar and SATB Choir) was commissioned for the 30th anniversary season of the Children’s Chorus of San Antonio.

He has performed throughout the United States as a solo artist, as an accompanist, and with his own group, the Kevin McCormick Ensemble. He has been a guest lecturer at the University of Texas at Austin and  has performed with the Children’s Chorus of San Antonio, the Symphony of the Hills, Canto, the Master Singers and other fine soloists & ensembles. His awards include recognition from the Guitar Foundation of America and the Academy of American Poets.

Compositions include the award-winning “Desert Passage” for solo guitar and “Annunciation” for young voices and guitar commissioned for the 25th Anniversary of the Children’s Chorus of San Antonio. 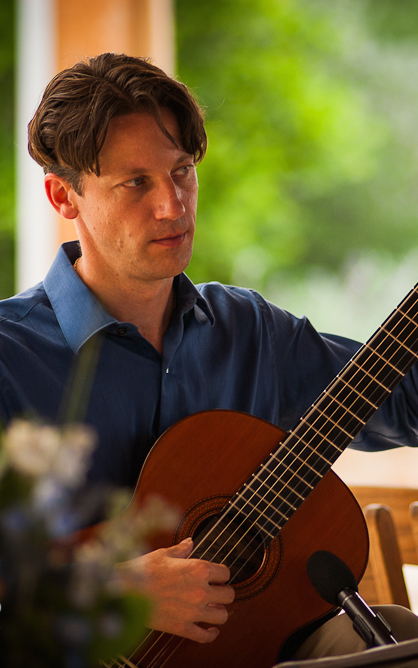 McCormick’s recordings include original song cycles With the Coming of Evening(1993) and Squall (1999), a collection of traditional guitar works Solo Guitar (2004) and a collection of Latin American and original guitar works Americas (2007) all on Mirabilis Records.  Songs of the Martin (2009) was recorded on an 1846 Martin Guitar and includes songs spanning the two centuries of the lifetime of this unique instrument.  In Dulci Jubilo (2013) finds him accompanying his daughter, soprano Rachel McCormick, in music of Advent and Christmas for guitar and voice.

“There are no production gimmicks or studio tricks here, just sensitive playing and beautiful singing that capture the warmth, mystery, hope, and joy of Advent and Christmas. Kevin and his daughter, Rachel, bring a quiet confidence and remarkable sense of intimacy that make this a truly enchanting collection of hymns and carols. ”

“The title says it all.  Kevin returning to his roots as an acoustic solo performer—no smoke or mirrors.  There is a wide mix of styles and textures.  From standards like “Spanish Romance” to “Capricho Arabe,” Kevin paints a wide and colorful sonic landscape.”

“McCormick’s music isn’t jazz, isn’t folk, isn’t pop; though many of the musicians come from the classical world, it’s not that either.  It’s a hybrid that comes across beautifully…Who cares what you call it—just listen.”

“McCormick’s music isn’t jazz, isn’t folk, isn’t pop; though many of the musicians come from the classical world, it’s not that either.  It’s a hybrid that comes across beautifully…Who cares what you call it—just listen.”

“Kevin McCormick, a classically trained local guitarist and composer, is wise enough to surround himself with equally talented musicians.  Joining McCormick’s gut-stringed guitar and David Sylvian-like voice is a classically trained band of percussion, piano, bass, cello, and violin…Together they  paint an aural watercolor of emotional intensity…The band mixes harmonic jazz ideas, rock & roll energy, and translucent spiritual intent.  The result is both hard to categorize and yet highly accessible.”

With the Coming of Evening

“McCormick uses a combination of acoustic and electric instruments. . .to create a very subtle shadowing of moods and colors, shifting slowly from one contemplative moment to the next. . .Music worth listening to.”